This week I had the great honor and pleasure to speak at the german BASTA! 2012 conference on .NET, Visual Studio and more (http://basta.net/). I gave a talk about software architecture in an agile environment or to be more precise the integration of the agile architecture lifecycle into Scrum by defining a separate role to manage the systems architecture.
With the link below you may download the session slides (most of the slides are in german).
Download.
For detailed information about the additional role called Architecture Keeper you may also read my previous blog post.
Eingestellt von Daniel Grund um 8:47 AM 10 comments:

Software Architecture in an agile Context

In agile process models like Scrum there is no role defined for an architect. There’s just the team (besides the Scrum Master and the Product Owner of course) and every team member shall be able to fulfill the different roles as needed. That means that even the system or software architecture is done by the whole team. This works great as long as the team is able to find a consensus on all problems arising from the requirements and concerning the software architecture. But what if the team cannot find a solution or someone disagrees on proposals made by other team members? This blog post introduces the concept of an architecture keeper and tries to define that role with all its rights and responsibilities. 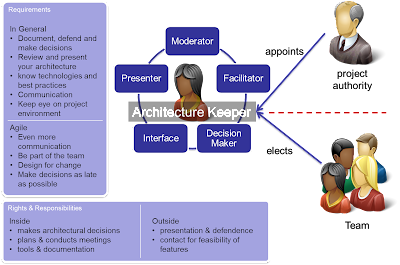